I can't believe how grown up the comedians are.
Take a look for yourselves... 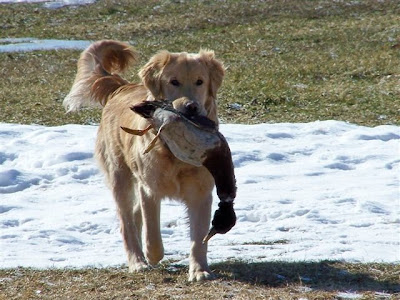 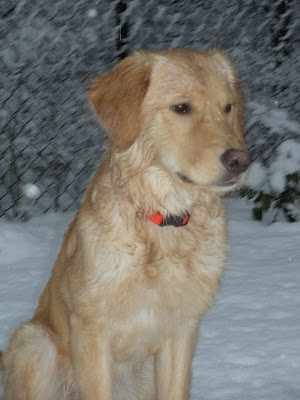 Charlee (Ms. Orange) finally got snow to play in-
unlike her Canadian brother and sister :) 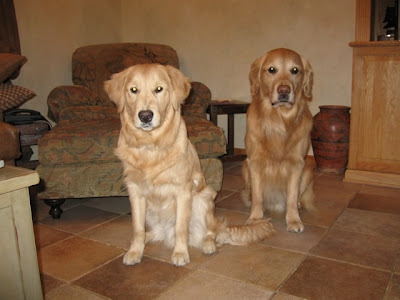 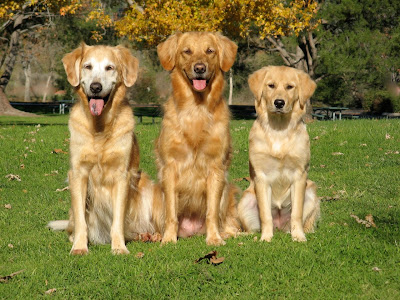 Ivy (Ms. Yellow) is with her sisters Polly and Darcy.
Ivy (on the right) earned her TD two weeks ago at seven months old! 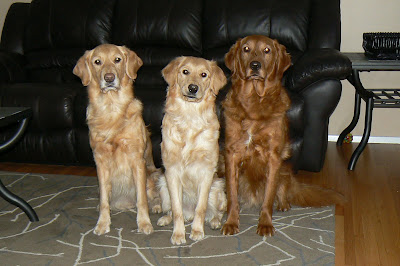 Punch (Ms. Pink) in the middle with Ditto on left and Cooper on the right.
Punch and Jill are doing obedience and having a blast.
Posted by Marcy Burke at 7:20 PM No comments:

I get posts from time to time from the comedians' owners. Everyone has worked hard doing the first four months of imprinting - getting to as many places and doing as many things as possible. They are all now busy training and just enjoying their puppies. I love hearing about how well they are doing. The puppies are busy doing tracking, obedience, field, agility. Below are more recent photos of some of the puppies.... enjoy ! 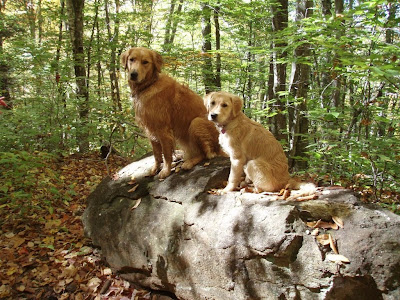 Rue (Miss Purple) with her brother Miles on a trip to Ashville, NC 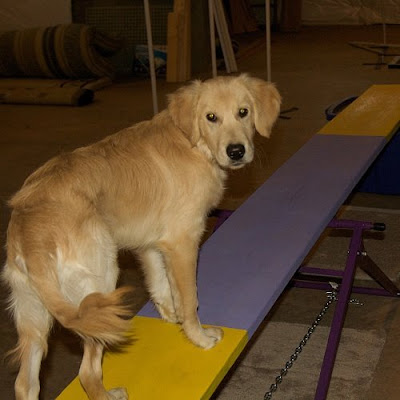 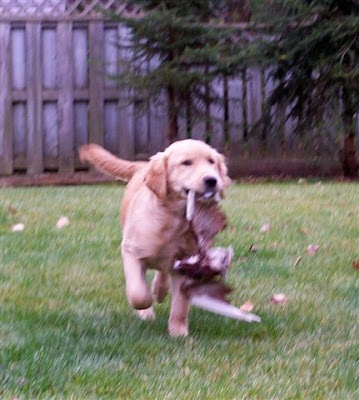 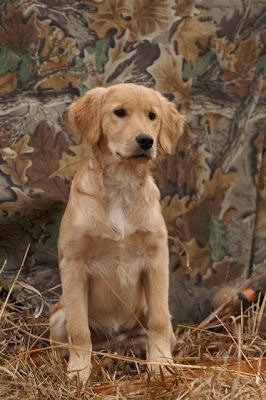 Ivy (Miss Yellow) hanging out at home
Posted by Marcy Burke at 10:18 AM No comments:

.... in birth order with their new families: 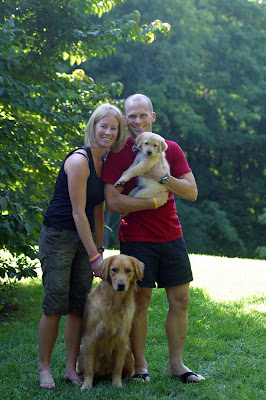 Ms. Purple is now known as Gaylan's Mad About Rue
Rue went to live with Kristin and Doug Cowell and their golden Miles in North Carolina. 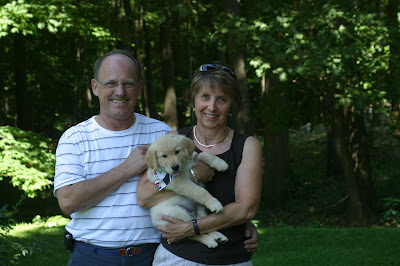 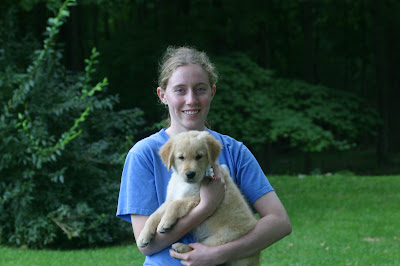 Mr. Black is now known as Gaylan's Siriously Not Joking
Griffin went to live with Kristen VanNess in Ohio. 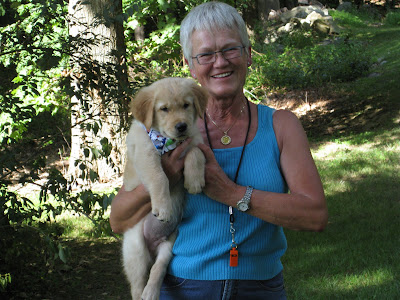 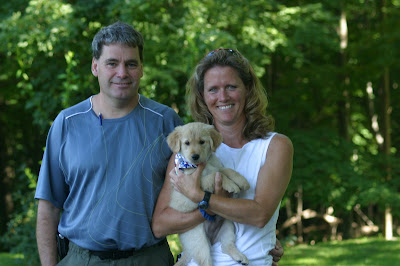 Ms. Pink is now known as Gaylan's You Quack Me Up
Punch went to live with Jill Brown and Scott Chisholm in Calgery Alberta, Canada. 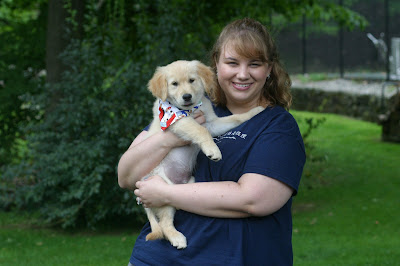 Mr. Green is now known as Gaylan's Laughing Out Loud
Riot went to live with Kelly and Chris Gifford in Leesburg, Virginia. 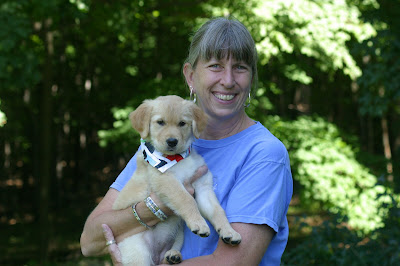 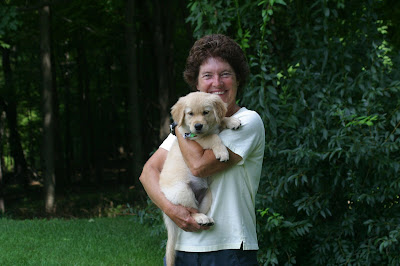 Ms. Yellow is now known as Gaylan's Thaleia
Ivy went to live with Vicki and Bob Chaney in California. 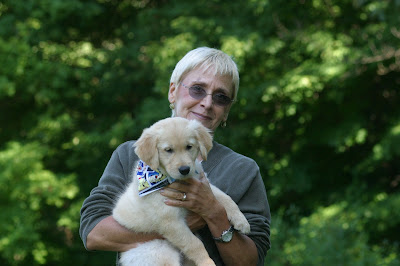 Mr. Blue is now known as Gaylan's Catch A Rising Star
Catcher went to live with Sandy and Rodger Washburn and his uncles Trader and Royal in Long Island, NY

It was the experience of a lifetime raising these little guys! I would never have had the pleasure of watching these guys grow up without Deb and Dr. Mary at Straws to Paws! Thanks for timing the breeding right! I never would have dreamed we'd get nine wonderful puppies. Thanks too, to Jill Richardson, Joker's mom for agreeing to do the breeding and being so supportive!
And last but not least, thanks to Gayle Watkins and Andy Chmar for their patience in giving me the education as we went along day by day, with the endless emails and phone calls and then actually putting up with us all living with you for almost three weeks. I loved every minute of it - well maybe not every minute, but almost! Thanks to you all for following the Comedians' adventures. You will be able to follow their careers on the Gaylan's website at www.Gaylans.com You can check out the last few photos I took of them - there sure was no time at the end to take pictures, they sure kept us running!
Posted by Marcy Burke at 7:12 PM No comments: 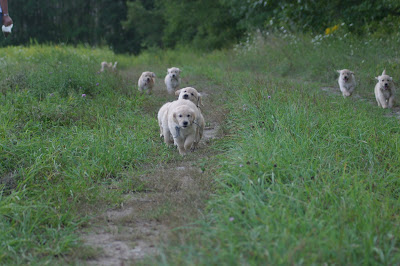 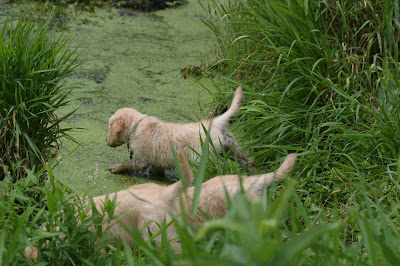 Sorry it's been so long since Mom has posted photos. She could not get her camera to work but she must have fixed the problem since she did nothing yesterday but take pictures of us! We've kept mom and Aunt Gayle very busy. Monday we all went to the vet and spent a few hours getting health clearances, microchips and our heartworm and tick prevention. That trip was after our woods walk and a visit from Susie and Amanda.
Tuesday was different - no woods walk? What a bummer - but wow, we got up early and went to some place with so many places to play. There were fields and ponds with duck weed, a boat that we got to get in and out of and planes of all kinds making noise as they went over our heads. We followed mom through thick green grass and found a great wall to crawl on. Dreamer played the pied piper with all of us following her through the fields- boy it was lots of fun!!

Today we spent the day in the pen except when mom came to get us, but only one at a time. We got to go all alone to a new room and some lady was sitting on the floor ready to entertain us. Something must have gone right because mom, Aunt Gayle and everyone else in the room was very, very happy with us all! We got to eat, chase things, run out and get things to bring back to the nice lady. She made noises and made some thing get really big in the room but it seemed silly. She just kept giving us food when we checked out the stuff. The best part was the ball that bounced all over the place! We got to pounce on it and play with it and then the lady gave us even more food. Finally mom called us so the fun was over. That's when we listened to them talk about us while they played pass the puppy.
If you want to see the photos she took yesterday they are where mom usually puts them.
Posted by Marcy Burke at 7:19 PM No comments: 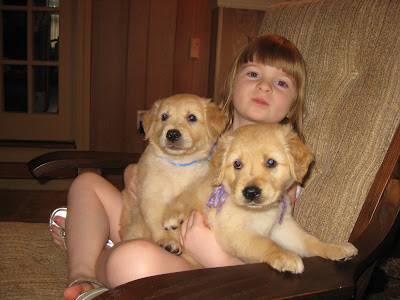 This photo is not new, but too cute not to highlight it on the blog. Erin stopped by with her mom and grandmother to see the puppies. As you can see she is an experienced dog kid!

More recent news.... We arrived yesterday late in the afternoon. The puppies never made a peep on the two-hour trip. When we got here Gayle and I hurried to put the puppies into their new home before the storm hit. When it began to thunder cookies rained from the sky :) Everyone settled in nicely and by evening all the dogs were quite at home with the puppies, literally in the box playing with them. Most of the comedians learned the dog door in a few minutes but all could manage it by the end of the night. They LOVE their new yard. One puppy got on a ball that was in the puppy pool (not floating) and balanced himself until he stepped off. They amaze me with how quickly they are changing. This is quite a learning experience for me but I am enjoying every exhausting minute of it! I have not had a chance to take photos but promise I will tomorrow. Check out the comedian's webpage http://www.gaylans.com/comedy.html on the Gaylan's site for photos we did last week at my house. My friend, Sue Johnson, is the photographer. She is a professional, but doesn't photograph animals; don't you think she should?
Posted by Marcy Burke at 8:23 PM No comments: 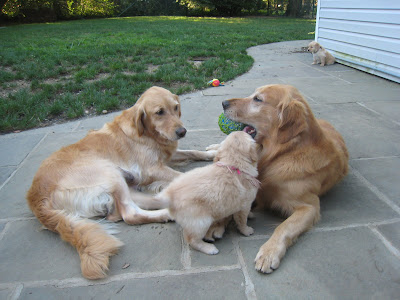 We're leaving shortly for Andy and Gayle's. The pups will begin their new adventures with a new home, tons of woods walks, swimming in the creek and meeting and playing with Gayle's dogs and new people.
I've put photos up in the last few days but never told you about them If you have not seen them take a look!
Posted by Marcy Burke at 6:13 AM No comments:

The puppies have had 92 people visiting plus an additional 75 visits from repeat visitors. Many people came to visit today because we head out to stay at Gayle's on Tuesday until the puppies go home. They have had a very busy few days.
Yesterday they took a road trip to my friend Judy's house. We met some of Judy's family and Marcy and Jim joined us for a walk. The puppies fussed for about five minutes of the half hour ride. They slept the rest of the trip and woke up to a wonderful yard to play in. We had them follow us down the lawns, a path in the trees and past the agility field. They never missed a beat. It was hot out so we all stopped and sat in the shade while the puppies played and crashed. We eventually woke them up and had them follow us back to the van for the ride home. Dart was very happy to take the trip and be part of the party. When we got home the puppies played by the pool and the boys went swimming in the pool. Then about 5:00 a friend came over to try to get a litter photo of the puppies. That was quite an adventure! I'll get some photos and video up tomorrow so please check back.
Posted by Marcy Burke at 9:15 PM No comments:

Marcy Burke
and Gaylans Goldens are co-breeding the Ice Cream Littter. Gayle Watkins and Andy Chmar are the breeders behind Gaylan's Golden Retrievers. They breed, train and show working golden retrievers who compete and work in a wide array of events. We are thrilled that they have agreed to co-breed Chex's litter with us. You can see more Gaylan's dogs at www.gaylans.com.